China’s Xi throws down gauntlet to US 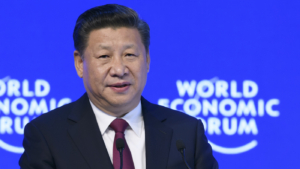 Much of this attention has focused on the part in which Xi warned that China will not be “bullied, oppressed, or subjugated,” and that anyone who dares to try “will find their heads bashed bloody against a great wall of steel forged by over 1.4 billion Chinese people.” The speech has been characterized as “defiant” and “fiery.”

Xi said those things (or a Chinese version, as translations are often imprecise), but in a speech of approximately 7,200 characters (where each character or ideogram is in effect a word), only about 770 characters were devoted to the military and the warnings about China not being bullied.

More importantly, the broader speech reflected a set of points that have been longstanding Chinese memes and themes, many of which predate the founding of the CCP. Above all, the speech focused on China’s (and not just the People’s Republic of China’s) efforts to modernize and advance from being one of the most backwards nations to reassuming its place as a global leader.

To this end, it is striking that Xi placed the CCP’s development and programs alongside such events as the Taiping Rebellion (the Chinese civil war that was the bloodiest conflict of the 19th century), the Tung-Chih Restoration and the Boxer Rebellion. All of these were characterized as efforts at reforming China in order to modernize and progress. The salient difference, according to Xi, is that these previous efforts all failed, whereas the CCP’s efforts have succeeded.

This goes to the heart of the “Century of Humiliation” and the fall of China from economic and political preeminence in Asia (and arguably the world) to becoming the “sick man of Asia.” Xi noted that while China was exploited by foreign powers (in particular the United Kingdom during the Opium Wars), it was also internally weak and backwards. Xi describes it as semi-feudal, and that’s arguably accurate, certainly in the Chinese countryside of 1921. This domestic weakness, in turn, made China vulnerable to foreign depredation.

It is the CCP, Xi emphasized, that broke China out of this backwardness. In essence, the CCP has earned the support of the Chinese people through its demonstrated effectiveness. For this reason, Xi went on to state, any effort to separate the CCP from the Chinese people is doomed to failure (or at least fierce opposition from the CCP).

Not surprisingly, the success of the CCP in lifting China is tied to Xi’s own policies. As he emphasizes repeatedly, China’s current growth and achievements, while due to the CCP’s century-long efforts, are part of “the great revival of the Chinese people,” which is the core of the “China dream” — a concept directly linked to Xi himself. As Xi also claims that the CCP represents the pinnacle of 5,000 years of Chinese history and civilization, he implicitly suggested that he is one of China’s greatest leaders.

But Xi also credited socialism with this “great revival.” Indeed, Xi’s speech was as much a full-throated reaffirmation of the socialist credentials and nature of the CCP and the PRC as it was an effort to secure his own laurels. The speech was an important reminder that there is an ideological component to the challenge posed by Xi and the CCP, one rooted in socialist thought.

It is in this context that Xi stated that China will not be “bullied, oppressed, or subjugated.” Echoing Chinese diplomats Yang Jiechi and Wang Yi at Anchorage, Xi made clear that the PRC won’t tolerate being lectured, nor will it evolve in directions set by others. China has its own “core interests,” which it will not make concessions on — an important point when considering developments ranging from the South China Sea to human rights to cyberspace and outer space to expectations of a more liberal CCP.

Xi’s warning that those who seek to “bully” or “subjugate” China will bloody their heads against a great wall of steel was clearly rooted in the same sentiments that Yang and Wang evoked when they warned that the United States was not qualified to criticize China, and that the Chinese people would no longer tolerate this kind of behavior. Notably, trying to get China to liberalize, whether with regards to the Uighurs or Hong Kong, was portrayed as “bullying” and “subjugation.”

On the same grounds, expecting China to moderate its behavior towards Hong Kong or Taiwan is a forlorn hope. “Resolving the Taiwan issue,” he stated, is part of unifying the nation and is a “historic mission” for the CCP.